Nurses who temporarily worked at a Rio Grande Valley hospital shared images that led to public outcry in mid-June.

Allegations of a body left unattended for hours, limited bed capacity and under-staffing were addressed by the hospital in a binder shared with local officials on Friday.

A nurse who spoke to Channel 5 News on the condition of anonymity echoed the same concerns.

"It got to the point where I felt like my nursing license was not safe, and I couldn't stay there anymore," the nurse said, alluding to the issues she encountered there.

While her time at DHR was brief — lasting a little more than two weeks — the nurse said she had several patients die.

"I was nurse for six different patients and all but one of them died," she said.

The nurse worked at the smaller of the two COVID wards created by DHR Health — SIDU 1, with a maximum of about 50 beds. SIDU 2 could hold nearly three times as much by the time she left. The hospital was using SIDU 1 all through May when they were only tasked with single-digit cases, according to hospital data. The demand grew in late June when SIDU 2 started helping treat cases in the triple digits. 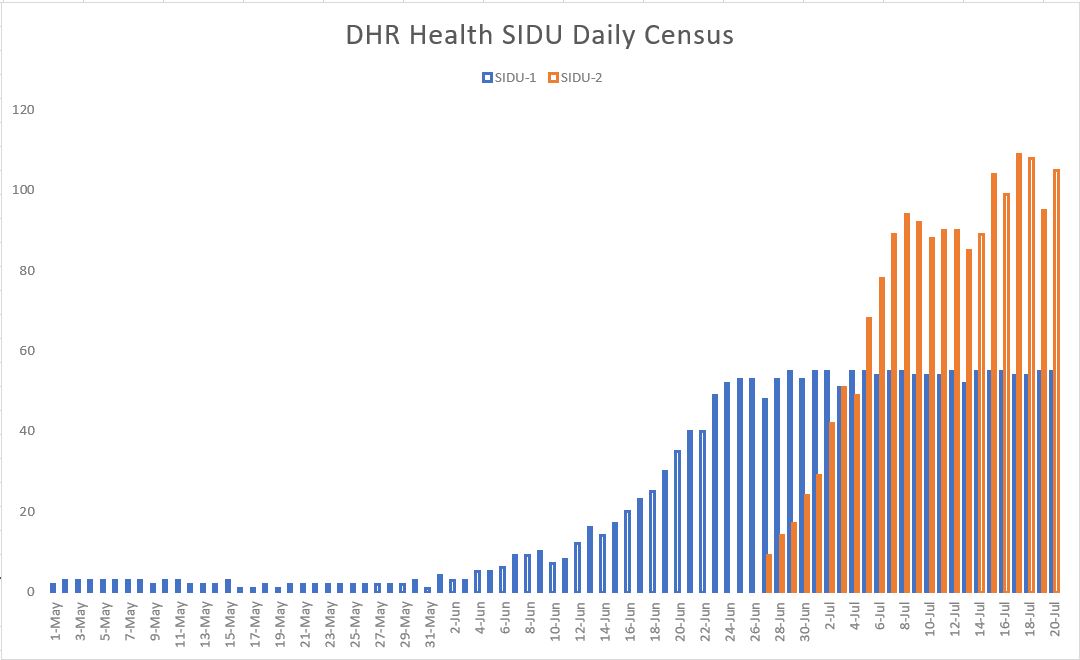 "They were doubling patients up in rooms," the nurse said. "Say, if heaven forbid a patient was going to code, you couldn't even fit a crash cart in there to try to take care of them."

DHR Health has been steadily expanding the number of beds available for COVID patients. The rapid expansion caused problems, according to the nurse.

"They needed the space so bad that one of the days when one of my patients had died the body wasn't even removed from the room before they were bringing the next COVID-positive patient over to put in the room. They couldn't turn over the rooms quick enough," the nurse said.

It wasn't clear if that patient is the same patient mentioned on social media.

However, the hospital confirmed a man's body was left unattended for 11 hours after a funeral home, called one hour after his death, failed to claim the body in time.

Three refrigerated trailers were purchased by the hospital to address any issues with delays in the transportation of deceased patients. The hospital also created a morgue response team to facilitate and ensure adequate transportation of a body that isn't claimed by a funeral home within an hour of the death.

Staffing, in general, at the hospital is a problem that both the nurse and DHR Health were closely monitoring.

About 350 contract nurses assisted the hospital in addition to its current staff, according to information included in the binder.