Firefighter injured while putting out large fire in Hidalgo

A firefighter is in stable condition after helping put out an early morning fire in Hidalgo that multiple fire crews responded to.

Crews with the Hidalgo, McAllen, Edinburg, Pharr and Weslaco fire departments were seen Saturday morning fighting the blaze at a building near the Payne Arena on 10th street in Hidalgo. 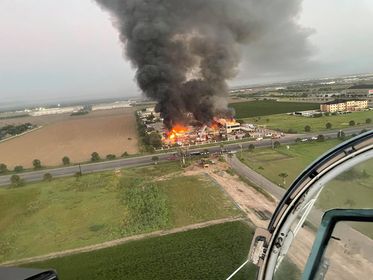 "That we know of, we do not have any civilians that were injured," Rolando Reyes with the Hidalgo Fire Department said. "We do have a firefighter that was treated here on scene and taken to the hospital for a foot injury."

So far it is not known what caught on fire or what caused it.