Police arrested a 33-year-old man in connection to a shooting investigation that occurred in Donna on Sunday.

Adrian Trevino-Lopez was identified as the man who shot at the occupants of a vehicle following a chase that police say ended in a crash at the parking of Mari’s Drive-In, located at 602 S. 11th St.

Surveillance footage shows the man identified as Trevino-Lopez exiting a dark-colored Chevrolet Silverado armed with a shotgun, according to a news release from the Donna Police Department. 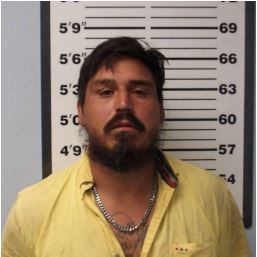 The driver of the vehicle – identified as Guadalupe Trevino-Lopez – also exited the vehicle, according to the release.

No one was struck by gunfire and no injuries were reported, the release stated.

Police are still searching for Guadalupe Trevino-Lopez, the release stated.

Those with any information regarding the shooting are urged to call the Donna Police Department at 956-464-4481.