Doctors from the Rio Grande Valley sent a letter to Texas Gov. Greg Abbott on Friday.

About 170 doctors who are part of the Rio Grande Valley COVID-19 Physicians Task Force penned the letter, according to Dr. Ivan Melendez, Hidalgo County Health Authority.

“Our twelve hospitals were all on diversion today and people were being resuscitated on ambulance stretchers outside the hospitals and in hallways,” the letter states.

The doctors are urging the governor to reinstate the shelter-in-place orders and restrict travel to essential personnel only.

They pointed out the increase in the rate of positive results. Initially, of the population tested, about 2.5% were positive cases – that rate has now grown to 10%.

Cases and deaths have sharply risen since the state reopened. Resources are becoming scarce.

Though the public can choose to stay at home, there’s been a lack of personal responsibility.

“However, this Fourth of July the beaches and parks were packed and many citizens were partnering with friends and family. Thus, we cannot rely on individuals to appropriately act without the mandate to shelter-in-place,” the doctors wrote.

Due to the difficulty of obtaining signatures, 127 of the members who authored the letter signed it.

See below for the letter sent to Texas Gov. Abbott. 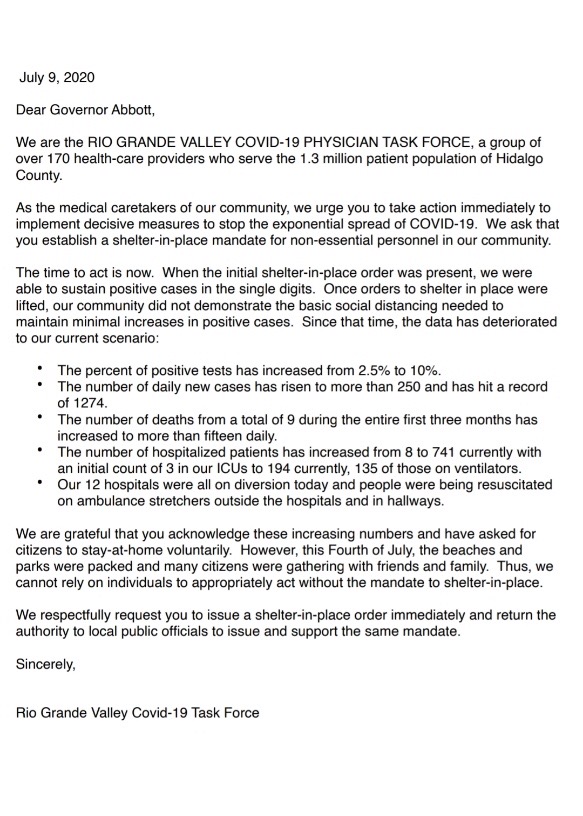