Crews with the Texas Department of Transportation reached a major milestone in the I-2/I-69C Pharr interchange project, the department announced Thursday.

The fly over bridge connecting I-69C south to McAllen is nearly complete and will open in late June, the department said.

As part of the project, TxDOT crews are building two brand-new fly over bridges heading toward Harlingen and McAllen that will each have two lanes.

In mid-July, the fly-over bridge that connects traffic I-69C south heading toward Harlingen will shut down for eight months, TxDOT added.

Those driving from Edinburg to the basilica in San Juan or Harlingen will have to take a new detour. 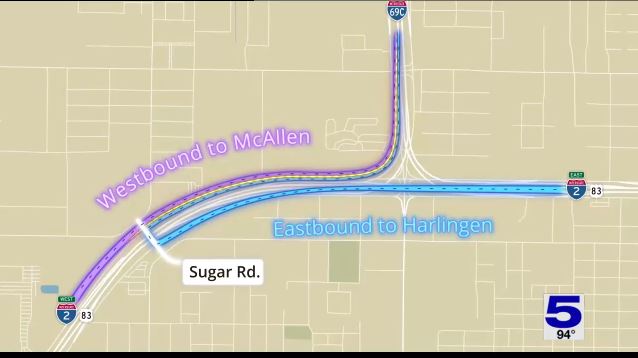 "Traffic would get on the newly constructed direct connector number four, exit at Sugar Road, at sugar road they'll make a Texas U-turn, as we call it," TxDOT Pharr engineer Pete Alvarez said. "Then get back on the eastbound frontage road and then ultimately the eastbound main lanes and be on their way towards Cameron County."

This temporary change may cause some traffic build up - but Pharr district leaders say the inconvenience will only last until about March of next year.