‘Morale is at its worst ever’: San Juan officers, past and present, detail woes, reality of new leadership at shrinking department

It’s the kind of workplace where having any type of mustache will lead to a writeup, one officer said.

“Because according to him, ‘That's the way I want it — because that's how DPS was.’”

Those words of criticism come from David Smith, a current officer within the San Juan Police Department — although he requested that his real identity be preserved in fear of retaliation from his employer.

However, Smith’s issues with the department stem much further than their chief’s take on facial hair. Instead it is one that leaves remaining officers stretched thin, while creating an environment that, according to Smith, would cause prospective officers to look in a different direction.

The criticism follows a public records request made by Channel 5 News that identified a decrease in the number of police officers within the department this past year. 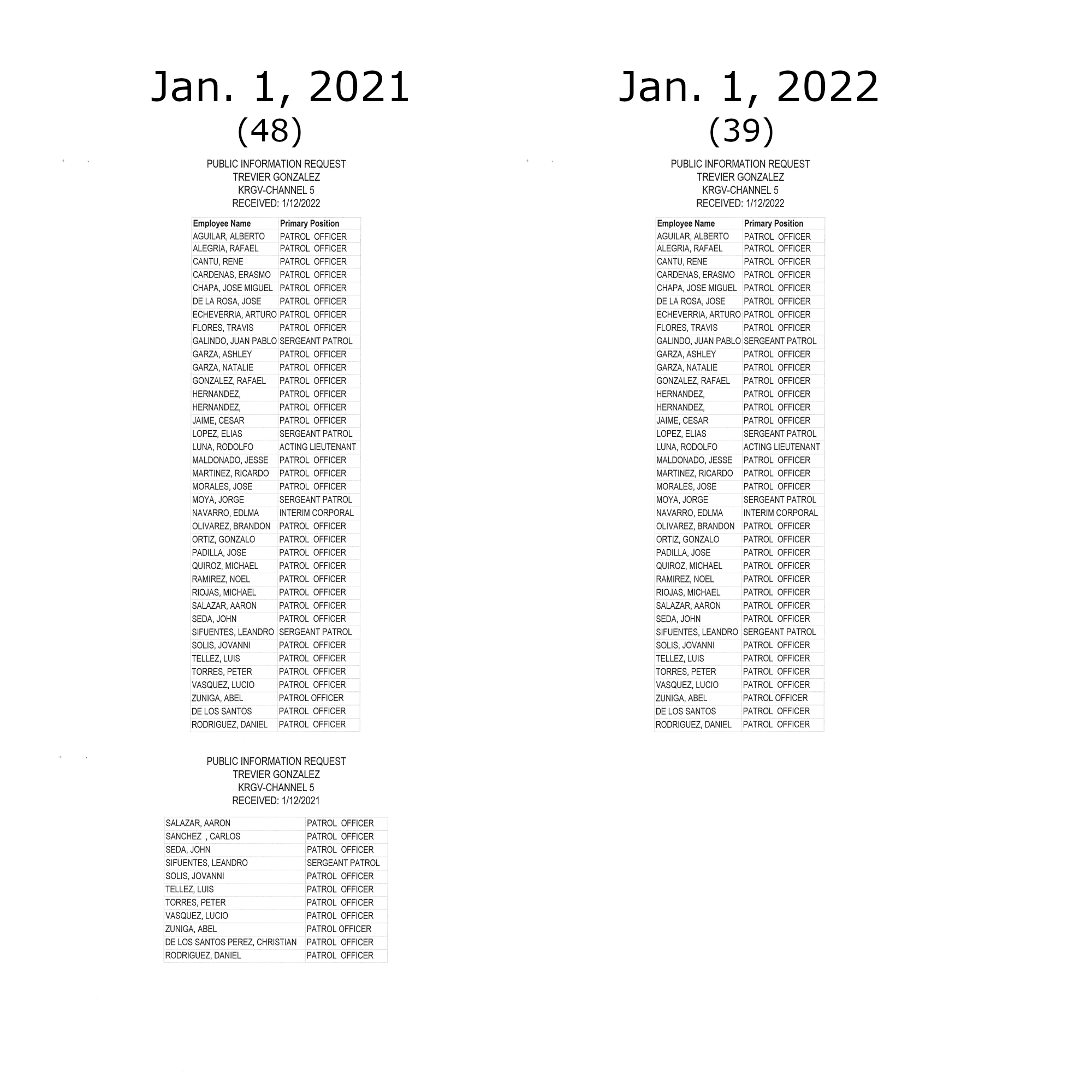 Based on the records provided, the report detailed the department’s total number of police officers on Jan. 1, 2021 was 48. A year later, that number dropped to 39 — a more than 20 percent decrease.

Last week, San Juan City Manager Benjamin Arjona responded to the decrease, and while he was initially unfamiliar with the staffing numbers of the department, he reassured the public that both response times and the quality of policing would not be affected as a result — even saying that as many as five officers remain on patrol and any given time, sometimes even more.

“Eleven police officers — it may seem like a lot of officers — but do we have enough officers patrolling the street? Yes we do,” Arjona said.

The city manager also stated that starting pay for incoming officers began at the 31 to $32,000 a year range — something clearly not true if one visits the police department’s website.

A screengrab from https://www.sanjuanpolice.com/career/ details that starting pay for San Juan Police officers is vastly higher than what the city manager had previously told Channel 5 News.

Smith was quick to point out several discrepancies with Arjona’s statements, as well as the 2022 roster provided to Channel 5 News. Although it does display 39 peace officers, as many as six had resigned, were not an employee, or had an unknown work status before Jan. 1, 2022, according to Smith.

Juan Pablo Galindo, for example, is currently listed as a Sergeant Patrol Officer. However, Galindo was federally charged with a civil rights violation in December 2019 and has not been with the department for some time, Smith said.

Of those remaining 33 officers — only 21 are actually patrol officers. The “primary” positions listed on the public record incorrectly label at least six investigative officers as patrol officers, Smith noted.

“John Doe,” who also requested to remain anonymous, is a former officer for San Juan PD. Today, he works for a different city, though he does keep tabs on his former coworkers.

“There was never a staffing issue,” he said. “Everybody loved working when I was there."

Doe said he primarily worked under Juan Gonzalez, who served as police chief for the department for nearly 12 years before abruptly retiring in 2020.

According to previous reports, it was on Aug. 5, 2020 when Gonzalez submitted retirement paperwork. That submission came after he was placed on administrative leave a month prior.

The city of San Juan did not have any public documentation as to why Gonzalez was placed on leave, but prior reporting implies that it was his handling of the department’s regional SWAT team, LEERRT (Law Enforcement Emergency Regional Response Team) that led to officers reportedly accusing him of playing favorites. 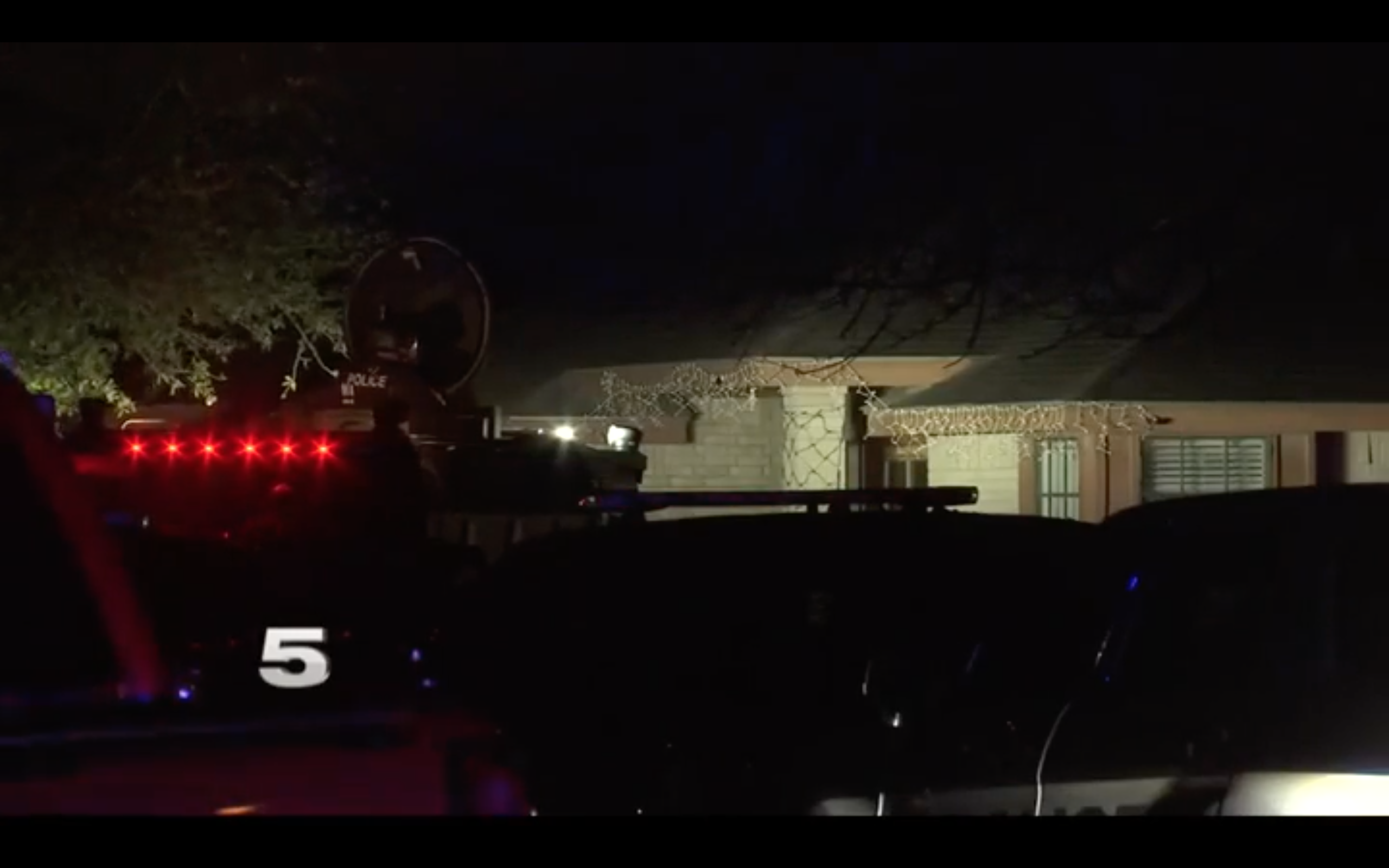 In this January 2017 file photo, San Juan Police Department’s Law Enforcement Emergency Regional Response Team aided the Donna Police Department in a standoff situation in the early morning. No one was reportedly hurt.

But it was that operation, Doe insists, that helped elevate the department.

“Everybody went to San Juan because of their SWAT Team,” he said. “The pay — it wasn't an issue because I mean — the prestige of being on that team was more than enough."

Doe said the team is still operational, but it too has been reduced.

"It's there, but it's not running to the capacity of what it used to be,” he said. “Once (Gonzalez) left, a lot of departments decided to pull their MOU (Memorandum of Understanding or agreement) because they knew (it) wouldn't be the same."

Ruben Morin, who began his policing career at San Juan before becoming a long-term DPS Trooper, was sworn-in as the department's new chief on Dec. 15, 2020. During that time, Chief Morin said he was ready to lead the department in a “new direction.”

Doe, however, is told that the department is instead seeing more changes from a presentational perspective.

“From what they tell me, I mean he just came in and just started running it like a DPS office,” Doe said. “He changed uniforms to include the hat, to include boots, to include — multiple different items of clothing that just — were more towards the DPS side than your typical officer. If you look (at) 2021 and how much their uniforms changed, it just — it took off into that direction. The tie, the hat, the boots, different slacks I believe — they were making it miserable for the guys that were there." 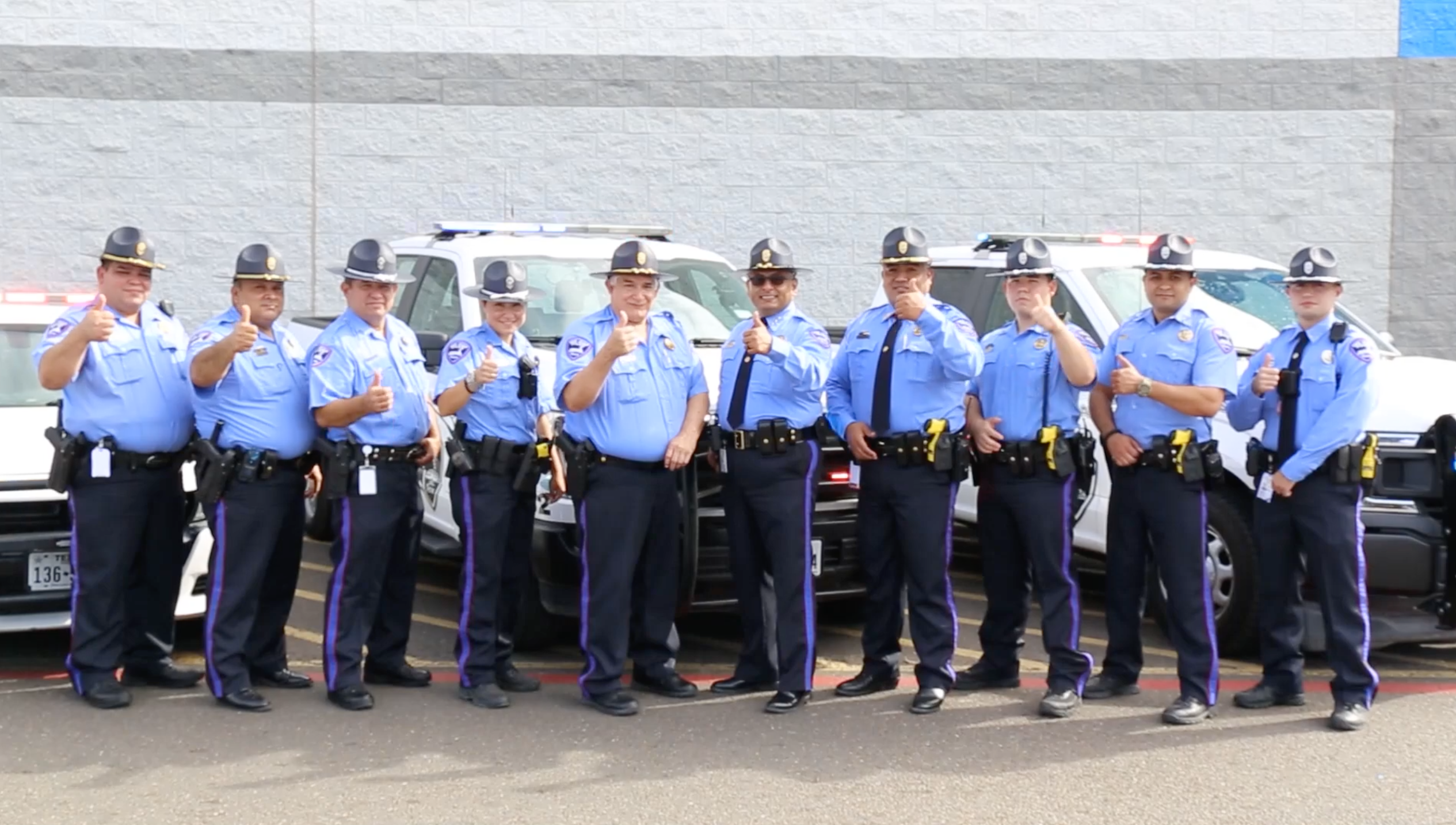 Above, in this photo from the San Juan Police Department’s inaugural ‘Shop with a Cop’ event in December of 2021, officers can be seen wearing a flat-brimmed hat in addition to boots and a tie.

Below, in this file photo from a March 2019 story, a San Juan Police officer conducts a traffic stop while wearing a more urban, traditional uniform. The San Juan Police Officers Association was not able to respond as to whether or not the uniform change is something that has affected morale within the department that experienced a 11-person decrease from January 2021 to January 2022. 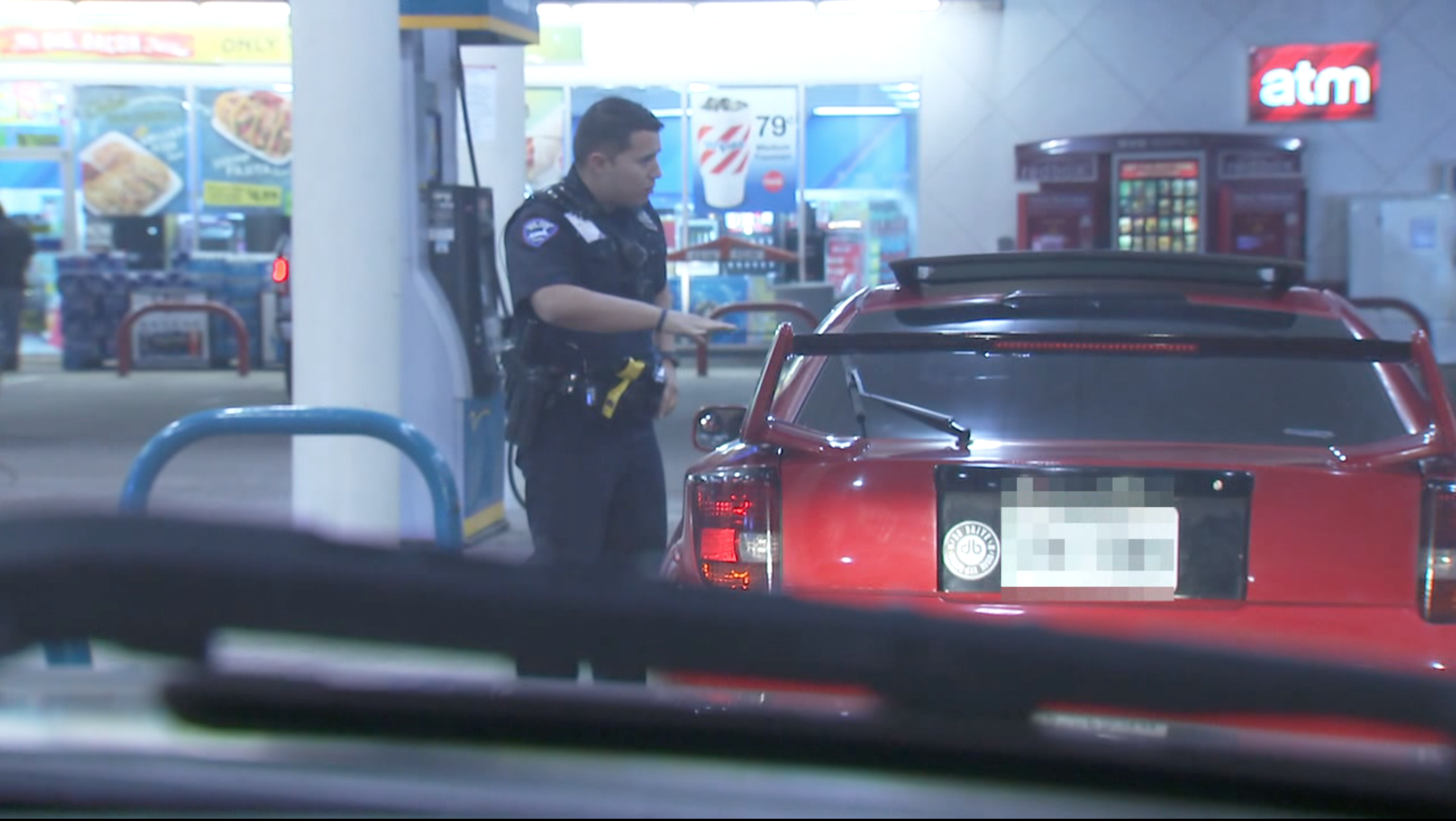 Smith adds that the sudden shift to a DPS-style of policing has led to issues in morale among officers.

As another apparent example, in some instances, Smith said officers are essentially required to make three stops per hour, something against the law, according to the Texas Transportation Code.

“(Yet) these guys are telling the officers, ‘You need to make three contacts per hour… I don't care, but you need to stop them. If not, you're gonna get a writeup,’” Smith said. “Even though you don't want to say that's a quota — that's a quota.”

Aside from dress code and alleged stopping requirements, Smith said due to current staffing numbers, mandatory overtime is often a reality for many. He adds that, during times of sickness, Morin allegedly makes officers instead use their comp time. Only when those comp days are completely exhausted may officers begin to use their sick days, something that became quickly noticeable at the time of the pandemic.

In a phone call Monday afternoon, Chief Ruben Morin spoke to the department's current staffing numbers. He said he believes the department is currently at 38 officers.

In going over the roster, there were at least two officers on the Jan. 2022 roster provided to Channel 5 News that included officers who were no longer with the department.

"I think he's been gone for several years," Morin said on behalf of Jose Miguel Chapa, one of the officers listed.

Morin said Juan Pablo Galindo, who has been charged with a civil rights violation, is still listed as an employee under civil service statute.

"He is still accounted for. Until the case goes to trial and they determine what they're gonna do... He has the possibility of coming back to the police department," he said.

For the apparent issues with the roster, Morin deferred that we speak with the city manager.

Similar to Arjona, Morin maintains that the police department currently does have enough officers. Not only are there five officers at any given time, but overlapping schedules cause that to be anywhere from 8-10 patrol officers.

"We continue to do our best here,” Morin said. “We've done several changes here in the department to make sure that we have plenty of coverage at all times and that's — we've been able to do that."

Morin said that the department has long had a no-beard policy, but that it was revised during his administration to exclude facial hair altogether.

Smith now believes the problems he and his coworkers are facing will cause incoming officers to simply pass over the department for somewhere else.

From a data viewpoint, monthly reports made public during city commission meetings don’t show a shift in the city’s crime rate in either direction, but Doe said that’s something that can be attributed to the department’s staffing numbers.

“The community doesn't show very much crime because of the fact that it had so many officers,” Doe said. “Just because it didn't have that many, doesn't mean the quality of the crimes weren't there. I mean — when I worked there I had experienced things I thought I never thought I would have experienced and all of it really opened up my eyes to see what goes on. Not just in San Juan of course, but in other cities.”