"Texans with disabilities fear voting will get harder for them as special session on GOP restrictions nears" was first published by The Texas Tribune, a nonprofit, nonpartisan media organization that informs Texans — and engages with them — about public policy, politics, government and statewide issues.

Sign up for The Brief, our daily newsletter that keeps readers up to speed on the most essential Texas news.

It took Nancy Crowther three hours, four public bus rides and an impressive amount of gumption to make sure her vote counted in the 2020 election. She’s hoping Texas lawmakers don’t make it even harder the next time.

With Texas Republicans determined to enact additional voting restrictions in the upcoming special legislative session, much of the uproar has focused on changes that could make it harder for people of color to cast ballots. Less attention has fallen on another group of voters bracing for what could happen to them under the GOP’s renewed push to further tighten the state’s voting procedures — people with disabilities, for whom the voting process is already lined with potential obstacles.

Among them are people like Crowther, a 64-year-old retiree, who could have been shut out from voting last November had it not been for her own tenacious determination. Immunocompromised because of a neuromuscular disease, Crowther chose to forgo her usual trip to a nearby polling place and instead turned to mail-in voting in hopes of safeguarding her health during the pandemic. But as Election Day neared — and after experiencing interruptions in her mail service — she began to worry her ballot wouldn’t make it back to the county in time.

A former transit employee who worked on improving accessibility on public transportation, she pulled up the city bus schedule and started mapping the distance between her home in South Austin and the Travis County elections office 9 miles away. Under Texas law, she couldn’t ask someone else to return her ballot, so Crowther, who uses a wheelchair, had to make the trip herself.

“That’s the only thing I could think of,” Crowther said. “So I hit the road.”

Double-masked and loaded up with hand sanitizer, she boarded the first bus to a community college on the east side of town, then transferred to a second bus that would get her closest to the county building. From her drop-off spot, she still had to traverse a quarter of a mile in her wheelchair, navigating an uneven intersection and a construction tunnel, at one point ducking under a guide wire to press forward. 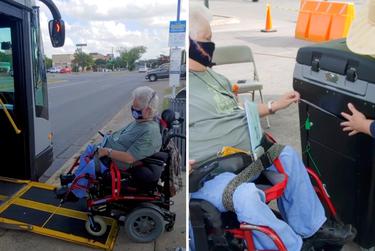 Nancy Crowther took on a three-hour journey on public transportation to get her mail-in ballot turned in during the 2020 presidential election. Credit: Courtesy of Julie McConnell

When she finally got to where she thought she was supposed to be going, Crowther queued up in a line of cars for 20 minutes before a county worker asked if she was there to register a vehicle. She realized she was in the wrong line. Spotting the ballot envelope carefully tucked into the belt of her wheelchair, the worker pointed to some tents across the parking lot where ballot collection was taking place.

“I dropped it in and everybody cheered because they knew how much of a hassle it was, and I thought, ‘OK, where’s the bus I catch to go home?’” she said.

In a state with some of the strictest voting rules in the country, Crowther’s ordeal illustrates how easily access to the ballot box can contract for marginalized voters when new challenges emerge — and the risk lawmakers run in setting up new restrictions, including changes some disabled voters might not be able to overcome.

“They’re taking a lot of the dignity away from people with disabilities,” Crowther said. And while some of the technology is available to make voting an easier, more independent process for them, the rules have not kept up, she said. “They’re actually going backwards because of these discriminatory acts, and frankly, it just pisses me off.”

Texas Republicans have pursued broad efforts this year to ratchet up voting restrictions in the aftermath of a high-turnout election that saw high-profile fights over the state’s voting rules, including the tight eligibility requirements for absentee voting. The 2020 election marked a shift from what was traditionally a tool utilized by the GOP to one that was instead taken up by more Democratic voters. But as the GOP has worked to clamp down on what remains a limited voting option, voters with disabilities — who are among the few groups of Texans eligible to vote by mail — have been caught in the middle of the fight.

Republicans have cast their proposals as “election integrity” measures to protect the voting process from fraud, even though there is no evidence it occurs on a widespread basis. But throughout the spring legislative session, nearly every version of the GOP’s priority voting legislation raised alarms for disability rights advocates who warned lawmakers they would likely run afoul of federal protections for disabled voters.

Texas offers two avenues to voting most helpful for people with disabilities. If they’re unable to vote in person without needing assistance or injuring their health, they can request a mail-in ballot. If they want to vote in person but need assistance, they can ask someone to accompany them to a polling place to help them through the voting process.

Under Republican proposals that are expected to be reconsidered this month, both of those paths might be further constricted.

In the Senate, Republicans wanted to require proof of a condition or illness, including written documentation from the Social Security Administration or a doctor’s note, before disabled voters can receive mail-in ballots for every election in a calendar year. Under current law, voters need only attest that they have a disability that qualifies them for a mail-in ballot.

That proposed change was eventually pulled down, but Republican senators moved forward with a bill that would have increased the likelihood that people with disabilities would be cast as suspect voters if they used other legal accommodations, like having assistance at the polling place.

The GOP bill would have allowed partisan poll watchers to video record voters receiving assistance in filling out their ballots if the poll watchers believed the help was unlawful — a change that disability rights advocates argued would wrongly target people with disabilities. For voters with intellectual or developmental disabilities, for example, voting help may require prompting or questioning that could be misconstrued as coercion by a person unfamiliar with that sort of assistance.

Although voters can select anyone to help them as long as they’re not an employer or union leader, House Republicans attempted to set up new rules for those helping voters, including a requirement to disclose and document the reason the voter needed assistance, even if for medical reasons.

At multiple points during the session, Republicans said they tweaked some of those proposals in response to concerns from disability rights advocates. But when the final version of the legislation emerged from backroom negotiations just before the end of the regular session, it included unwelcome changes to redefine what constitutes a disability under state election law, as well as new identification requirements for voting by mail that advocates said lacked clarity.

“Our voices weren’t being heard at the very end when it was the most important,” said Chase Bearden, the deputy executive director for the Coalition of Texans with Disabilities.

State Sen. Bryan Hughes and state Rep. Briscoe Cain, the chief Republicans behind the measures, did not respond to requests for comment. Although Texas Democrats blocked that legislation from getting a final vote at the end of May, Republicans are expected to revive some of those proposals when lawmakers return to the Capitol this week.

The possible changes to the voting process for people with disabilities come at a time when advocates have been working to engage with and organize the millions of voters with disabilities into a voting bloc hefty enough to claim lawmakers’ attention.

But while their advocates lobbied against rules that could complicate the voting process, voters with disabilities struggled to make themselves heard during a legislative session that began before vaccinations for COVID-19 were widely available. Virtual testimony at public hearings was largely limited, and advocates said the coronavirus heightened dangers for medically vulnerable people who could not risk a trip to the Capitol.

Ahead of the special session, disability rights advocates have been working to marshal their influence. Two dozen organizations serving voters with disabilities recently signed on to a joint statement asking lawmakers to consider the “unintended and negative effects” of proposed legislation and demanding to be consulted throughout the legislative process. The organizations are in turn encouraging their members to deliver the statement to their local representatives and are working to return to the Capitol in larger numbers. Some advocates recently met with House Speaker Dade Phelan’s staff.

“I think we are now also sending a message that there’s such a thing as the disability vote — that we are an interest group,” said Bob Kafka of Rev Up Texas, a grassroots organization focused on increasing participation among disabled voters. “You hear about people of color, older voters, evangelicals, Catholics. They never actually think of the disability vote as a policymaker.”

If the Legislature’s goal is to ensure trust in the voting process, their influence will be integral, disability rights advocates argue.

As voting legislation moved through the chambers, Republicans argued that part of their efforts, including new requirements and potential penalties for those who assist voters, were meant to protect voters with disabilities from being exploited by people purporting to offer them help through the voting process. But disability rights advocates told lawmakers they were unaware of widespread documented instances of what they were trying to prevent.

“To be honest, I think if it would’ve passed as it was in that last version, I think we would’ve seen … more votes lost than their assumed or unproven [concerns] of these goings-on,” Bearden said. “We know for a fact that there are more votes that are thrown out that are legal votes that don’t get counted than there is demonstrated fraud over the last 20 years.”

At the same time, GOP legislators failed to preserve Democratic measures that could improve the process for voters with disabilities.

In a negotiated version of the legislation that left the House, Democrats managed to tack on an amendment that would have created a correction process for mail-in ballots that are ordinarily rejected because of a missing signature or an endorsement a local review board determines does not belong to the voter who returned the ballot. That issue has long been top of mind for advocates for voters with disabilities, whose signatures can change over time or are often not recorded similarly because of their conditions. Because the state does not currently offer them the opportunity to fix the issue, legitimate votes are lost.

“We have the time. We’re calling a special. We’re bringing everyone back,” Bearden said. “We should take advantage of that by bringing a bill that represents all of Texas, not one side versus another but something that actually creates the belief that we’re going to improve our voting system and improve the way we can vote and ensure our votes count.”

This article originally appeared in The Texas Tribune at https://www.texastribune.org/2021/07/05/texas-voting-disability/.

The Texas Tribune is a member-supported, nonpartisan newsroom informing and engaging Texans on state politics and policy. Learn more at texastribune.org.