Special Report: The Arribada - The Kemp's Ridley Sea Turtle's Recovery from the Brink

RANCHO NUEVO, TAMAULIPAS – An iconic Gulf Coast animal has a long road to recovery – not long ago, it nearly went extinct.

The Kemp's ridley sea turtle is declared endangered in the U.S.

It is no stranger to the Texas coast; nesting mothers sometimes land on South Padre Island.

It's been 70 years since the Kemp’s ridley sea turtle was first noticed by the outside world.

Since that time, the species has endured hunting, loss of habitat and declines from a major oil spill.

It still hasn't recovered to its numbers from when it was first seen.

Over the course of several days, thousands of nesting females land in the area – the phenomenon is called the arribada locally.

This past season, 72 percent of the nests laid by the entire species were on the 18-mile beach in this remote part of the Mexican Gulf Coast.

At its height, the arribada brings clusters of females on the beach, as far as the eye can see.

Conservation staff are working to reverse the trend.

People in the local communities used to hunt the mothers and the eggs during the arribada season.

Now, many biologists and staff who work at the Rancho Nuevo conservation camp are from the nearby area.

The Mexican government prohibits harvesting and is working to increase the population by providing more law enforcement presence, according to the U.S. Fish and Wildlife Service.

In 1978, the U.S. and Mexico agreed to send teams to Rancho Nuevo to cooperate, document, research and improve the odds of the sea turtle hatchlings’ survival. Research efforts continue at the site.

The international project is led by the Comisión Nacional de Áreas Naturales Protegida (CONANP), Mexico’s commission on natural areas, which directs the team from the U.S.

The number of nests decreased 27 percent from 2017.

The 2017 season was also the best year reported by the team.

The teams continue working to ensure the species' survival. 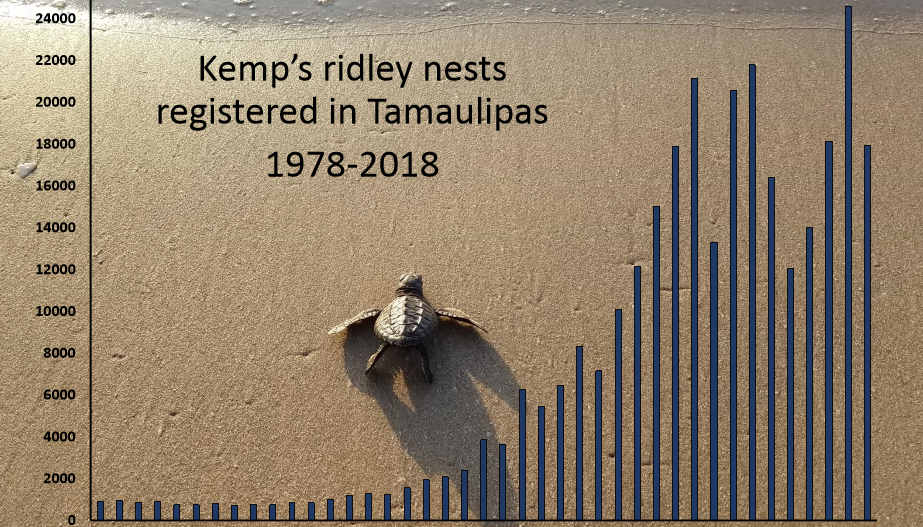